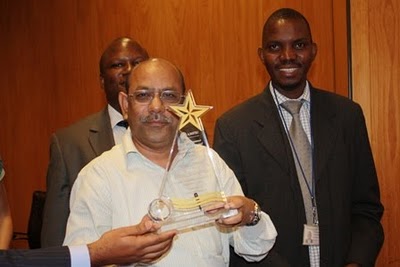 The Association of microfinance Association of Uganda has been trying to bring MFIs back to the drawing board by encouraging them to become socially accountable and relevant to their clients through social performance management (SPM). SPM is about making an organization's social mission a reality. It involves taking the steps to deliberately manage and achieve desired social results. AMFIU has been creating awareness and promoting social performance management among its members and the microfinance industry in Uganda and has had a positive response from the practitioners on this issue.

It is in this regard that AMFIU organized an award ceremony to recognize microfinance institutions that have made an effort in introducing and implementing SPM in their organizations. The award ceremony took take place on 27th September 2011 at Serena Hotel and BRAC Uganda emerged the overall Gold Winner.

The award was received by Khondoker Ariful Islam, the Country Representative of BRAC Uganda. In his remarks, he retaliated BRAC’s achievements as based upon their role as a learning organization and the coordinated program management system, monitoring, auditing and research departments that strives to learn everything about microfinance programs - including what works, as well as what doesn’t. He further said that each branch has a review committee that visits and talks to their members to see their progress. He emphasized that this kind of operation has given them confidence to serve their clients.

The function was officiated by the Minister of State in-charge of Microfinance represented by the commissioner for microfinance. In his address he emphasized that SPM is a global thing and encouraged all institutions to take it up as it enhances microfinance industry reputation and competitiveness. In his address the President of AMFIU noted that SPM is still in its infancy but called upon all players in the industry to embrace it. He also called upon partners to support AMFIU in such activities.

Several other key players in the microfinance industry participated in the event and won Bronze and Silver awards.